Thank you for all your prayers for us to have a successful and fruitful trip, which it was. Below is a travelogue with a little medical update at the end.

After planning all the pragmatic details for weeks and working many hours above usual, I left a slow cooker meal burbling on Tuesday morning and I handed off five children to a wonderful couple who agreed to babysit our children and crazy, untrained puppies for three days. The only reason the laundry was caught up and home clean is that my housecleaner worked for nine and a half hours straight, me working alongside her (while teaching no homeschooling), the day before. I am so, so far from being the "Superwoman" a lot of friends jokingly call me. Believe me, a supersized housewife who needs help to accomplish the most basic duties is more like it!
Our travel and flight all went smoothly, and we were so grateful that the federal mask mandate on airplanes was lifted just a couple of weeks prior.
Thomas was highly enthusiastic about having Mama and Daddy all to himself during the adventure of travel. He talked our ears off (and those of all other listening adults) for the subsequent three days.
Note that Thomas is wearing his green surgeon's scrubs! He likes wearing those to medical appointments.

We booked a hotel only 1.1 mile from Boston Children's Hospital and only one-half mile from my aunt and uncle's home.

My aunt and uncle hosted us for dinner at their home and it was heartwarming to see them after quite a few years. I think last time we visited, we had only three children.

We were all grateful to have access to a convenient shuttle bus to the hospital. 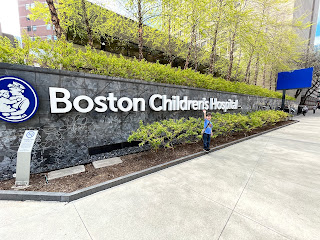 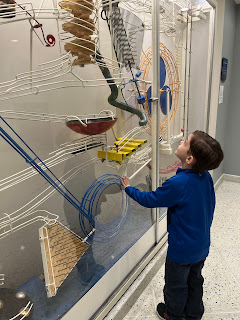 We met with the dietician at 9:00 a.m., grabbed a quick snack in the cafeteria, and then met with the gastroenterologist at 11:00 a.m. (well, noon, as he was running behind!). Medical updates are at the end of this blog post.
Then we took an Uber car to meet our old friends at the Boston Children's Museum. I met Rebecca via an online Catholic women's group when we were pregnant with our firstborn sons about 15 years ago. We've since had several opportunities to visit in person and Chris and I are honored to be godparents to their daughter Ruth. 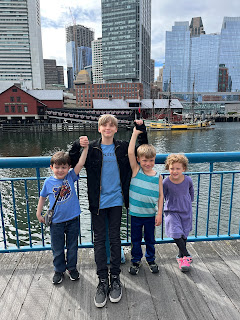 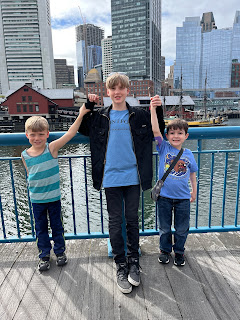 The children had a grand time in the museum and played independently, giving us adults a generous amount of time to catch up. 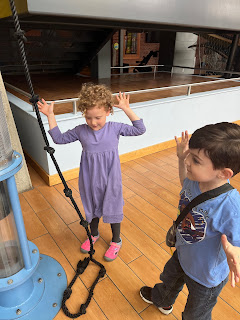 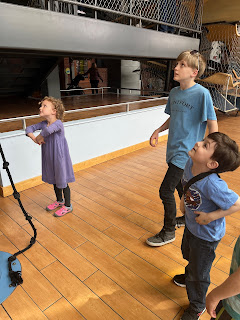 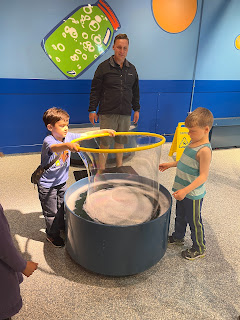 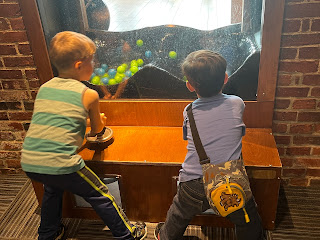 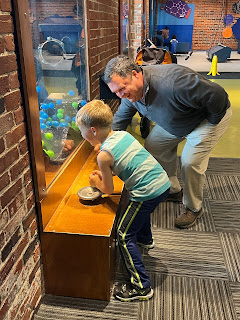 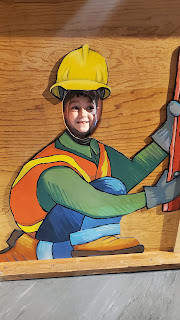 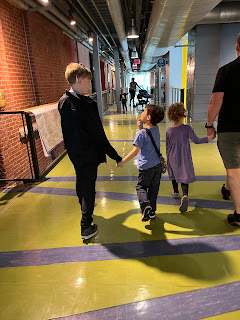 We finished out the late afternoon having dinner at a BBQ restaurant. (Normally we don't gamble on sugar-laden restaurant BBQ sauce with Thomas, but we did this time and it wrecked havoc on his blood sugar and GI symptoms till after midnight. Just a bit of BBQ sauce had so much sugar, raising his glucose so hyper that it then crashed alarmingly hypo for hours, resisting coming up or staying steady, and causing scary symptoms like his hair being soaked with sweat and his skin cool and clammy.)
Back at home, our son John ranked up as a Latin Mass altar boy to Master of Ceremonies and was given his own surplice. We were so disappointed to miss this special moment. 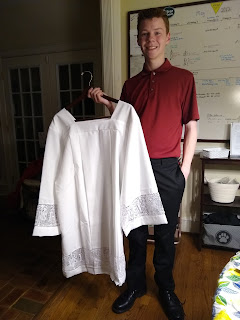 On Thursday morning, Chris had some work to do, so I took Thomas solo back to Boston Children's Hospital for lab work. We picked up souvenirs for the siblings, and Thomas chose for himself a surgeon's cap which he can now wear with his green scrubs. 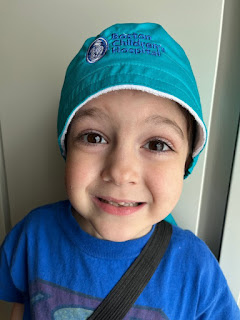 We got to see Uncle Toby one more time before packing up quickly and catching an Uber to the airport.


Meanwhile, back at home, the wonderful couple babysitting did an exceptionally good job. My teenagers report that Mrs. S. managed to accomplish everything (school, meals, chores, dogs, surprises) without using a TV as babysitter (because the remote was lost) and never once lost her cool (in contrast to me), plus she managed to throw in extras like taking all the children to ice cream. Four-year-old David had such a great time that when I came home, he asked if I could please return to Boston so Mrs. S. could continue taking care of him.
Out of the mouths of babes.


David being a circus monkey

There is nothing game-changing to report from this trip, but we do come away with comforting reassurance. This consult has been in the works for so long that the project started when Thomas was still losing weight and very symptomatic. In the last few months on new medications, he's become more stable than he's ever been and has been gaining weight beautifully.

The Boston team reviewed his history with a fine tooth comb and then examined all the nutritional care that he needs. We all know that adults who have weight loss surgery, having a portion of their stomachs removed, require extra special vitamins for the rest of their lives. Thomas has his entire stomach and gallbladder removed, plus has a damaged liver (involved in digestion). Many people think the pancreas is all about managing sugar, but that is actually only 5% of its job; meanwhile, 95% of its job is to release digestive enzymes, but Thomas's pancreas has no stomach to send it messages that food has been ingested. Thomas is still a little boy who has to grow up (not an adult done growing), so his nutritional needs require extremely diligent attention.

The team made recommendations on what his nutritional goals should be and ran many labs to check all his vitamin levels. Some labs are still coming back, but so far everything looks like we (the local team and parents) have been doing a very good job. (Liver labs remain poor, of course.)

This GI has taken care of "dozens" of patients with functional gastrectomies (in which the stomach and duodenum exist but are surgically bypassed) and said that none of them have had Thomas's "severe" blood sugar fluctuations in reaction to food. It feels good to know we are not crazy in our perceptions, but sad to come to the understanding that this complication is "severe."

This may become a relationship in which Thomas sees his Boston team in person once yearly to make sure his trajectory remains good, and they are available for telehealth visits in between. Meanwhile, his local team will continue to see him often.

It feels great knowing that we have gone to a top hospital that cares for very complex children and they, also, think we are doing what can be done to support Thomas. I think we can rest a bit easier now.

Homeschool Field Trip: We Immersed Ourselves in Van Gogh
May 26, 2022