It was rather a difficult week for Thomas's GI system. After one 30-minute episode, he outright asked me why his surgeon cannot perform his reconstruction surgery sooner than November 2nd in order to fix these problems. He is excited and eager! While I remain in fear much of the time, Thomas provides a good example for me of being grateful that these problems can be at least improved surgically, since they cannot be solved medically.

. . . is hard, so very hard! This life is not easy and challenges me nearly daily to my limits of knowing what on earth to do.

Like many moms, I think, I slip into thinking my homeschooling is "nothing," just a natural extension of motherhood, thus leaving me mystified about why I am drowning and don't have time for starting a foundation, fundraising, volunteering, writing books, training for a marathon, getting my hair and nails done, going out for massages, "meeting up with the girls," and so forth. When I remind myself that homeschooling is absolutely a full-time job equivalent to 40 hours or more, and then I'm parenting six kids and running a home on top of that, I feel better about how I'm managing. 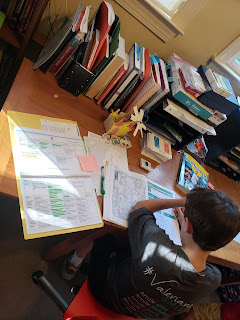 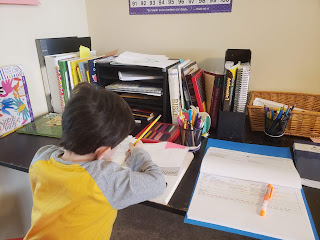 Chris and I went on a longer date that stretched into the evening! For Thomas's four months of cancer treatment, we rarely (if ever?) left him with a babysitter. Then for his four and a half months in the hospital, the only "dates" that occurred were if we ate a meal in the cafeteria while he was under general anesthesia having some procedure. Then in the six months since discharge, Chris and I have only gone on lunch dates of one hour's duration.

This week, we went to a late lunch at a fancy-dance restaurant where the food is positively art, and then a 4:30 movie, so we weren't home until the late hour of seven o'clock. Little boys were in pajamas and ready for bed, but the babysitter did not have to give tube feeding or medications.

Since coming home from the hospital, I've established about six regular dinners that we eat every single week. On Sundays we eat at a restaurant. That may seem like survival mode, and maybe it is, but I've watched us go from being fed by others (through meals delivered and restaurant gift certificates) nightly for six months to my being able to cook for us . . . and that makes me pretty happy!

I don't shop at the grocery store, but use InstaCart instead. On some weeks, I've been overwhelmingly busy, or some medical urgency has come up on shopping day, in which case all I do is open last week's order of InstaCart and hit "REPEAT."

I cook a hot breakfast for the family every day.

Lunch is catch-as-catch can and something each person makes for himself (except for the boys ages 4 and 6). People often eat leftovers. Sandwiches are usually based on peanut butter: we've switched to no-sugar added peanut butter. We've replaced Nutella with Peanut Butter Co.'s Dark Chocolate Peanut Butter (a low-sugar PB with cocoa). We use lower sugar preserves (granulated sugar, but less of it) and a no-sugar jam (sugar alcohol). A few of the kids will eat deli meat sandwiches.

Thomas needs to have three snacks per day also (mid-morning, mid-afternoon, and right before bed). Some common choices are:

Every carbohydrate Thomas eats must be paired with protein, so he is extremely accustomed to the question, "and what protein will you be having with that?"

Desserts are a sore subject so it is good we have dessert only once or twice weekly.  Do I let the five kids have more delectable desserts and always make Thomas feel like the left-out kid eating his less-delicious dessert? I'm just not ready to put him through that, so I've really reduced the sugar available in the house. The older kids get other opportunities for sweets when out and about, but I want Thomas in his very own home not to feel envious and sad.

60 People Who Work For IRL Michael Scotts Are Sharing Wild Stories That Could Easily Be Episodes Of “The Office”
November 24, 2021

How to Spot a Homeschooler: A General Guide
November 24, 2021

Homeschooling Through the Holidays – My Favorite Approach
November 23, 2021

Blog Tour and Giveaway: Murder at the Empire by Cathe Swanson
November 23, 2021