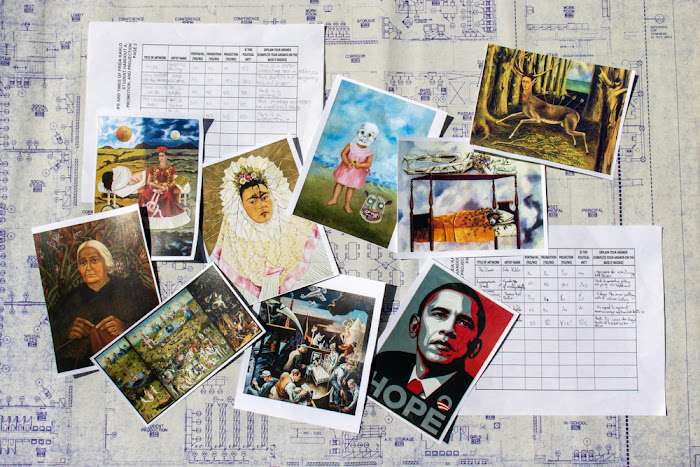 Art history isn't something that has its own curriculum on the kids' homeschool high school transcripts. Instead, at least so far, it's something that we've done as unit studies, and then I've incorporated those studies into whatever syllabus best fits it. For Will, all of her high school art studies, both hands-on and history/appreciation activities, are included as a 1-credit Fine Arts class on her transcript, and the syllabus includes details of each activity and resources used, written after the fact based on what was actually accomplished.

Syd will have numerous Fine Arts classes on her high school transcript, and it's my hope that one of them will, indeed, be Art History, although for that to be a credit that stands on its own we'll have to conduct a more thorough, extensive study at some point.

Until then, we study the art that interests the kids, as it catches their interest. And recently, that was Frida Kahlo, inspired by the Mexico study that was, itself, inspired by our Girl Scout troop's Spring Break cruise.

As we often do when we start a completely new unit of study, we started our Frida Kahlo unit with a selection of picture books. You know that expression--"Explain it to me like I'm five?" Picture books are meant to offer digestible explanations in an appealing manner, often exploring a topic through a unique lens meant to engage and inspire.

Both of these books were excellent introductions to the basics of Kahlo's life and works:

I've been trying to relearn some of my Spanish this year, so the kids also let me read to them from this awesome book:

So many animal names to look up and learn! Clearly, my college Spanish classes focused on the wrong things...

Part of the work for this study was creating activities to teach younger Girl Scouts about Frida Kahlo for our Girl Scout troop's World Thinking Day kit, so the kids chose their favorite Frida Kahlo paintings, and I used Google Image searches to find and download high-quality jpegs of them and printed them two to a page on cardstock. I try to remember to do this with all the images we study, whether they're paintings, photos, sculpture, or whatever. They come in endlessly handy for comparison and review, they make your Timeline game even bigger and better, and it's awesome how often they come in handy to build context in a different study.

And because every good Girl Scout activity includes a craft, the kids of COURSE had to test out these Frida Kahlo paper dolls: 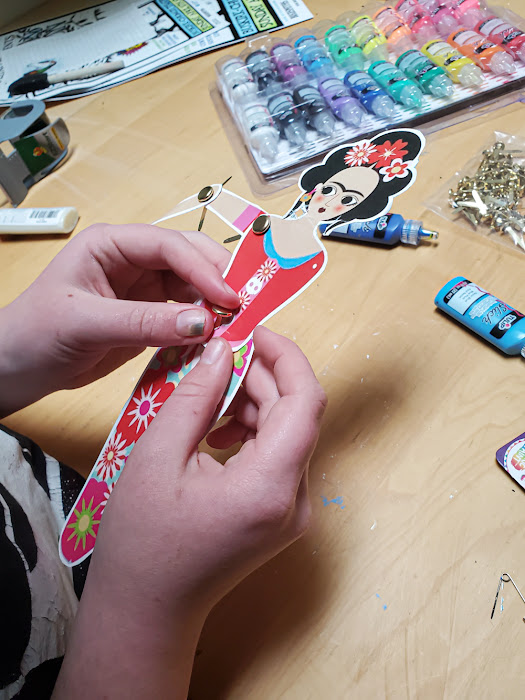 Beyond the picture books and paper dolls, the kids and I LOVED this American Experience documentary on Frida Kahlo:

It's a surprisingly exciting ride, with shocking moments, plot twists, stunning revelations, and a strong female lead! And it answers the question of Was Frida Kahlo The Most Epic Person To Ever Have Lived? with a resounding...

Once we were all devoted Frida Kahlo fangirls, I wanted the kids to have some practice analyzing her art. We'd also been talking separately about different methods of political protest, from flipping off the people who harass visitors to our local Planned Parenthood to participating in a march to support abortion rights, etc., so it seemed like a good chance to use Frida Kahlo as an example of how gender affects political speech, the kinds of political issues relevant to gender issues, and how personal speech can conflate with political speech to empower both.

We did a similar study of political speech in racial justice a couple of years ago, so this unit also builds upon that one.

I borrowed heavily from the PBS LearningMedia lesson on The Life and Times of Frida Kahlo for this, including borrowing the second page of this student handout for the kids to use to organize their work.

For their culminating project in this study, I assigned the kids each a selection of Kahlo pieces, and other pieces like Shepard Fairey's Obama graphic, Hieronymus Bosch's The Garden of Earthly Delights, a mural that's locally infamous for including a KKK cross burning, and that lost Diego Rivera mural, and asked the kids to thoughtfully categorize each piece as personal or a specific type of political, justifying their conclusions with evidence. I wouldn't necessarily say that I agreed with all of their categorizations, but they did back up their claims with evidence!

If we'd wanted to carry this study further, the kids could have used that worksheet as the basis for any number of essays, or they could have created their own personal-as-political self portraits or political art of any category. We might do some political art, anyway, as the kids have expressed interest in coming with me to the next Bans Off Our Bodies Block Party, and obviously they can't go without excellent protest signs!

I was happy, though, for the kids to simply accomplish my main learning objectives for them: 1) to fall in love with Frida Kahlo, and 2) to widen their understanding of how we, particularly as women, can express ourselves politically in this patriarchal culture.

Ooh, how awesome would a Frida Kahlo-themed protest sign be?!?

Blog Tour and Giveaway: Much Ado About Persuasion by Barbara Cornthwaite
June 25, 2022